Pick a major tech company today and chances are you'll be able to connect it and universities. Be it bringing founders together, or founders first conceiving the idea while at university, these grounds have been prime startup territory.

Knowing this, campus incubators have sprouted up on university campuses across the country with the hope of kickstarting the next Apple, Facebook, or Google. As we think of these companies, we can attribute their success to the people behind them.

Eggubator is a web-based recruitment platform for university startups. Eggubator provides the tools to make finding opportunities in areas of interest easier and encourages commitment for both founders and student employees.

Revisiting this project in 2021, I provide my reflection on each stage of our process and what could have been done better.

Our research began by learning more about the pain points of start-ups. We visited a university start-up showcase where we recruited three founders for interviews. We also circulated a survey that was received by university founders and employees. Being in the early stage of our process, a competitive analysis was also conducted on four virtual incubators.

From our research we identified four major pain points.

As there isn't a go to university job board, founders have to create multiple listings across several platforms.

Commitment drop-offs were present for both founders and student employees.

Start-ups without department support or research grants had a harder time with recruiting.

Some teams had members working remotely. This was noted as posing challenges to work efficiency.

TLDR: The major challenges faced by university start-ups revolve around recruitment and commitment.

It was apparent that the major pain points of university start-ups revolved around the recruitment process and commitment. Given that we had easier access to this group, we scoped down and focused on the university start-up founder experience.

We synthesized our research findings into three personas. Each persona portrays start-up founders at different stages and resources. Together, these personas capture the range of university start-up founder experiences. 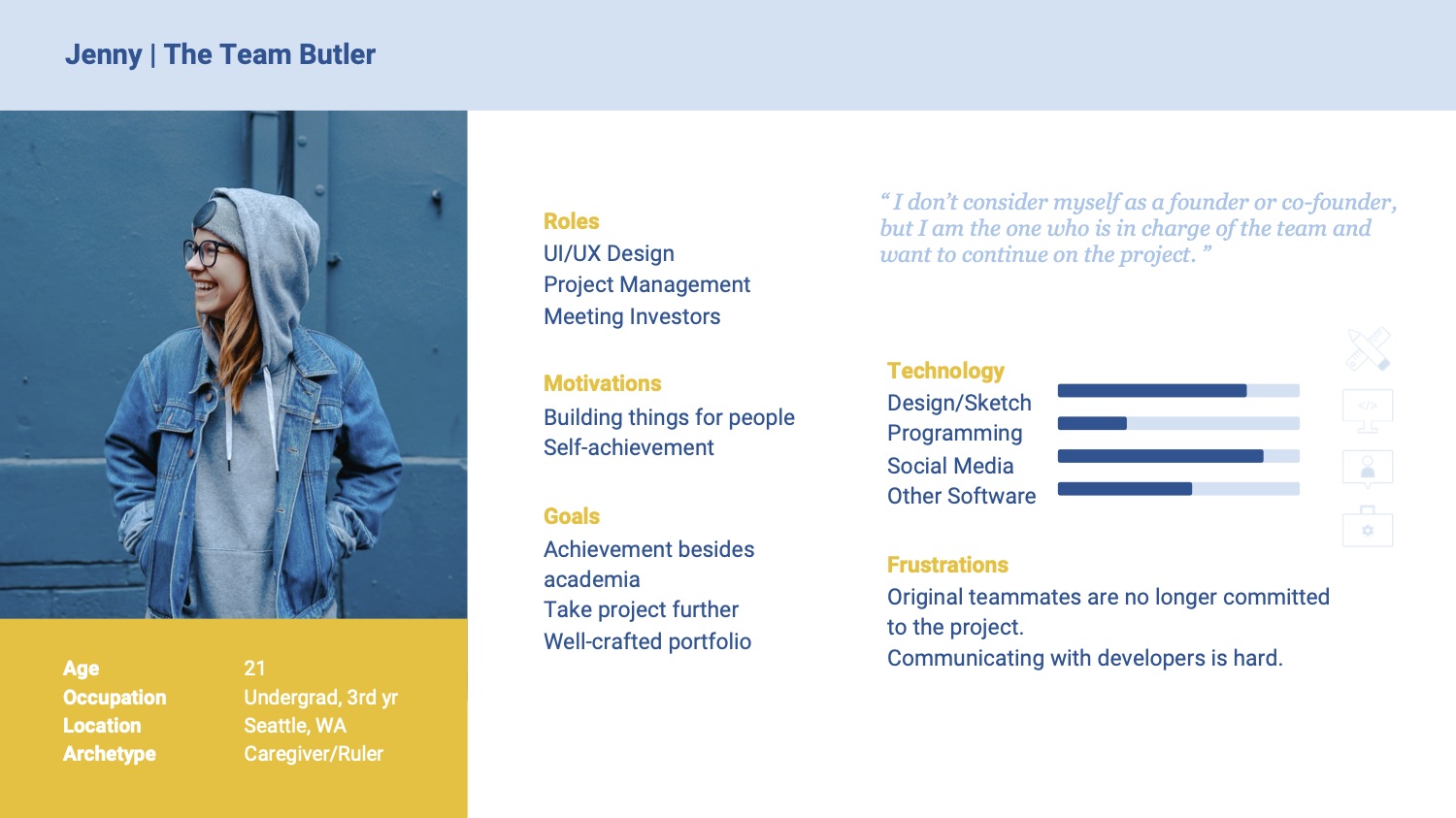 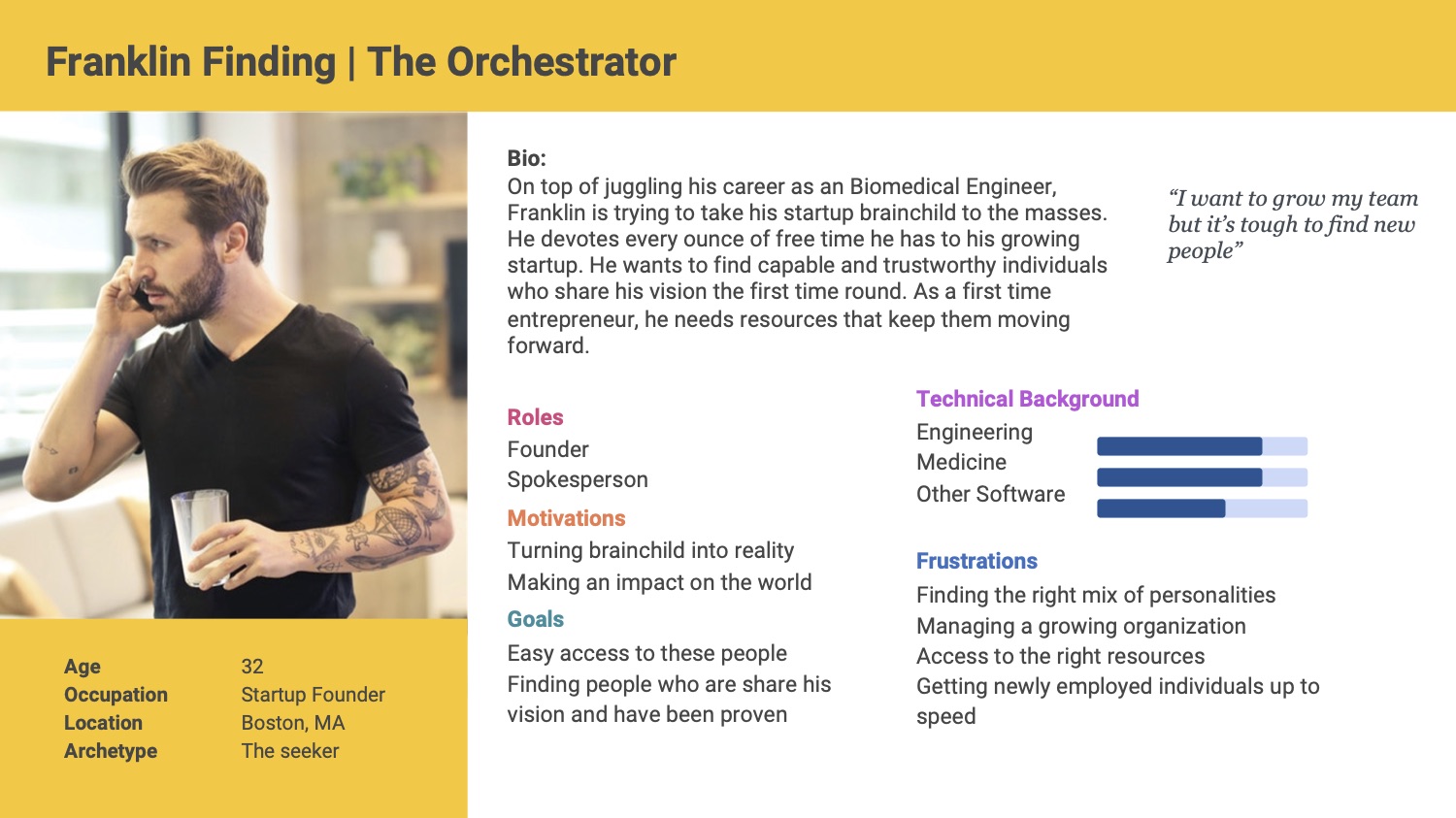 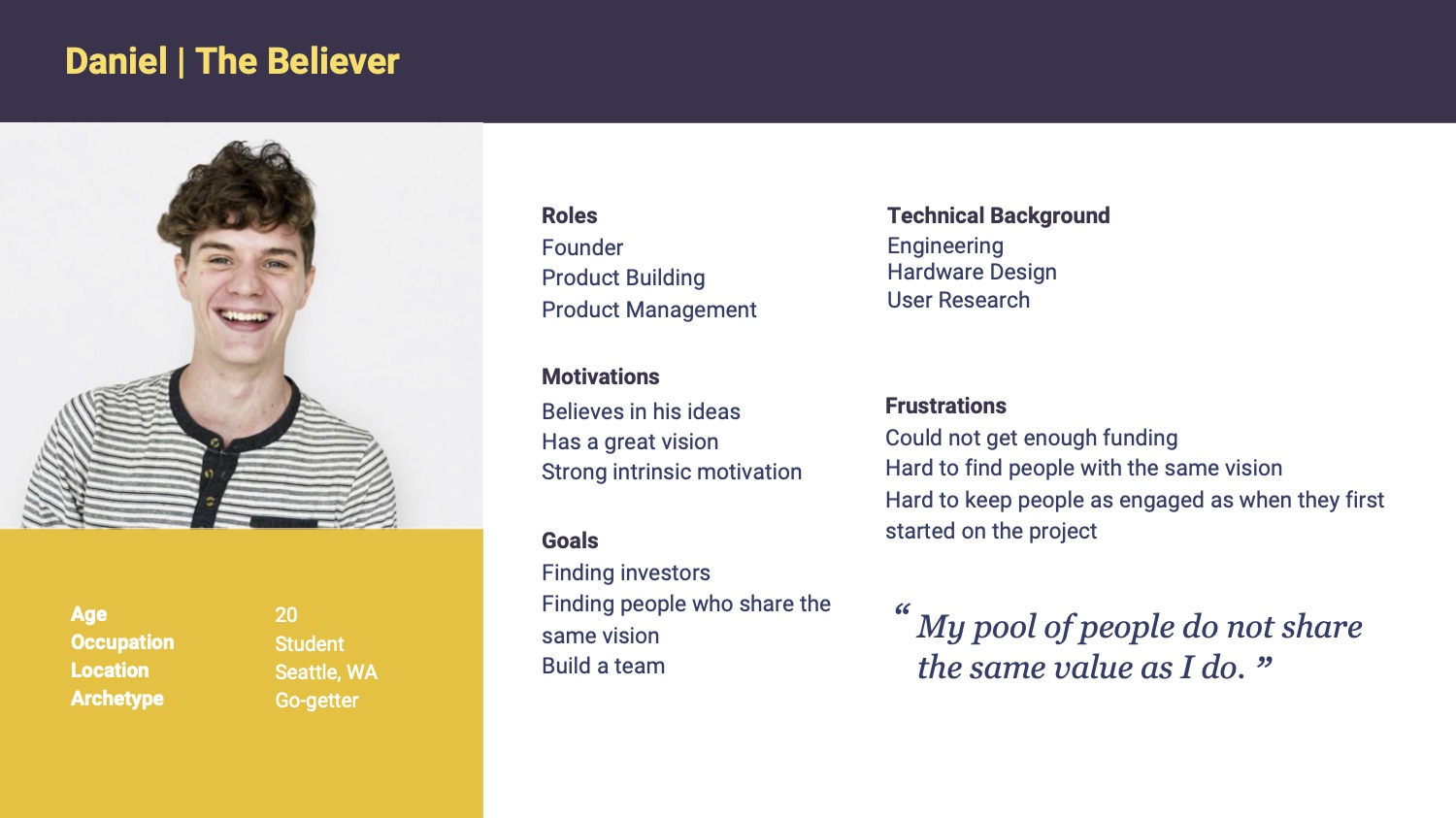 Through a white boarding session we identified the design question that would ground us in our ideation.

Looking back on the research phase, there are a number of things I would do differently. First, I would have scoped our focus much earlier in order to be more intentional and directed in our research methods. Second, I would also have conducted more rounds of interviews to dig deeper with founders. Lastly, I would have ensured consistency in creating personas.

Transitioning into ideation, we each sketched 6 ideas to address our design question. 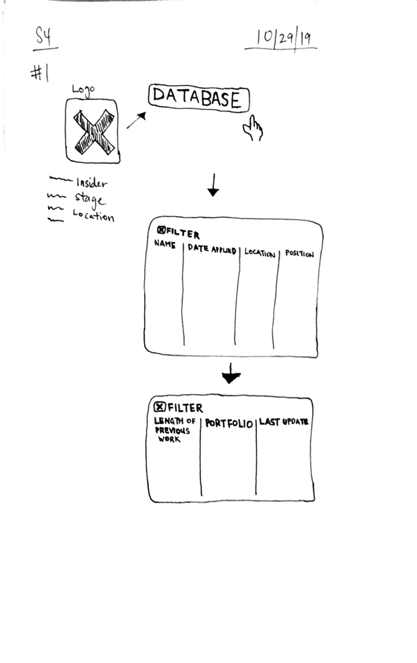 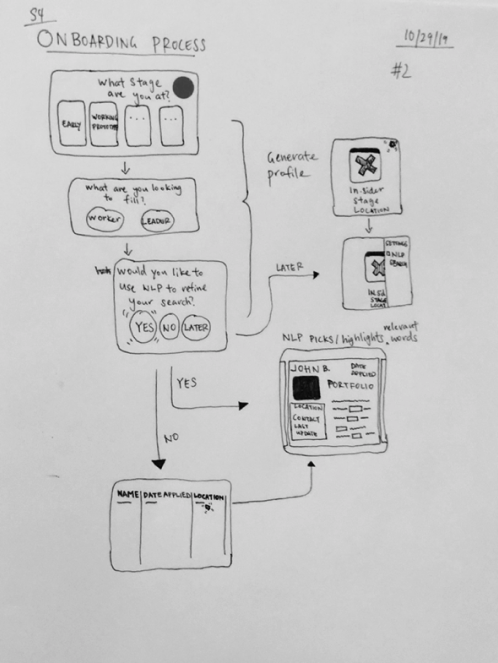 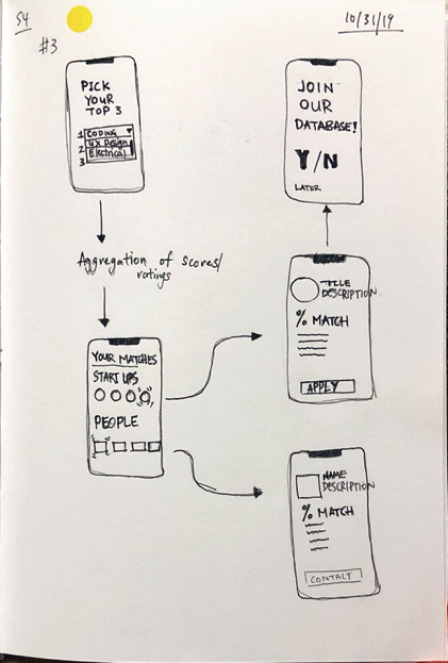 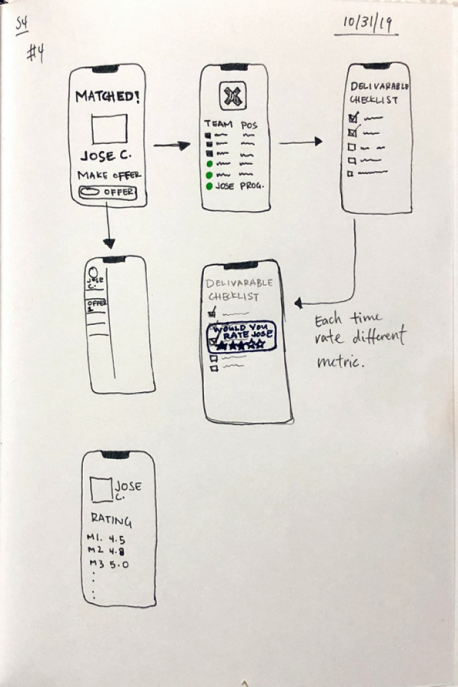 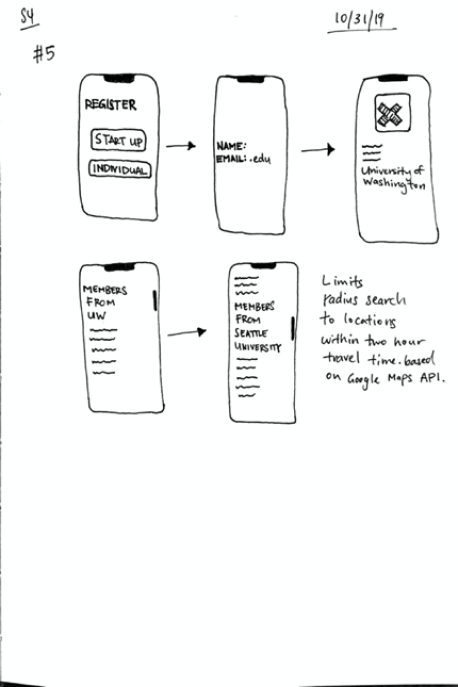 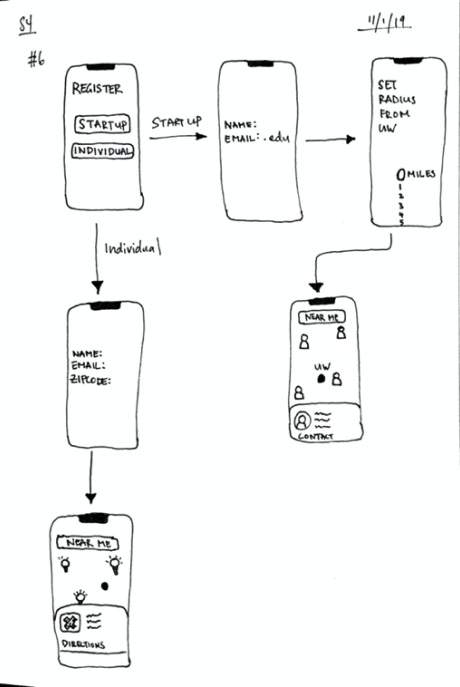 After our own discussions and gathering peer feedback, we used dot-voting to pick out the designs with the most potential. We decided to focus on three key design directions.

The job hub presents openings in a novel way. Displayed virtually as a map, the job hub encourages game-like exploration and navigation in a way that resonates more with university students.

Peer and course reviews are a common practice for university students of all levels. Leveraging this mental model, peer reviews reinforce accountability for both founders and student employees.

Interest-based matchmaking helps founders narrow down candidates by showcasing those with the best matches. This approach looks to move away from skill-based matching towards a more relational approach to finding the right fit. 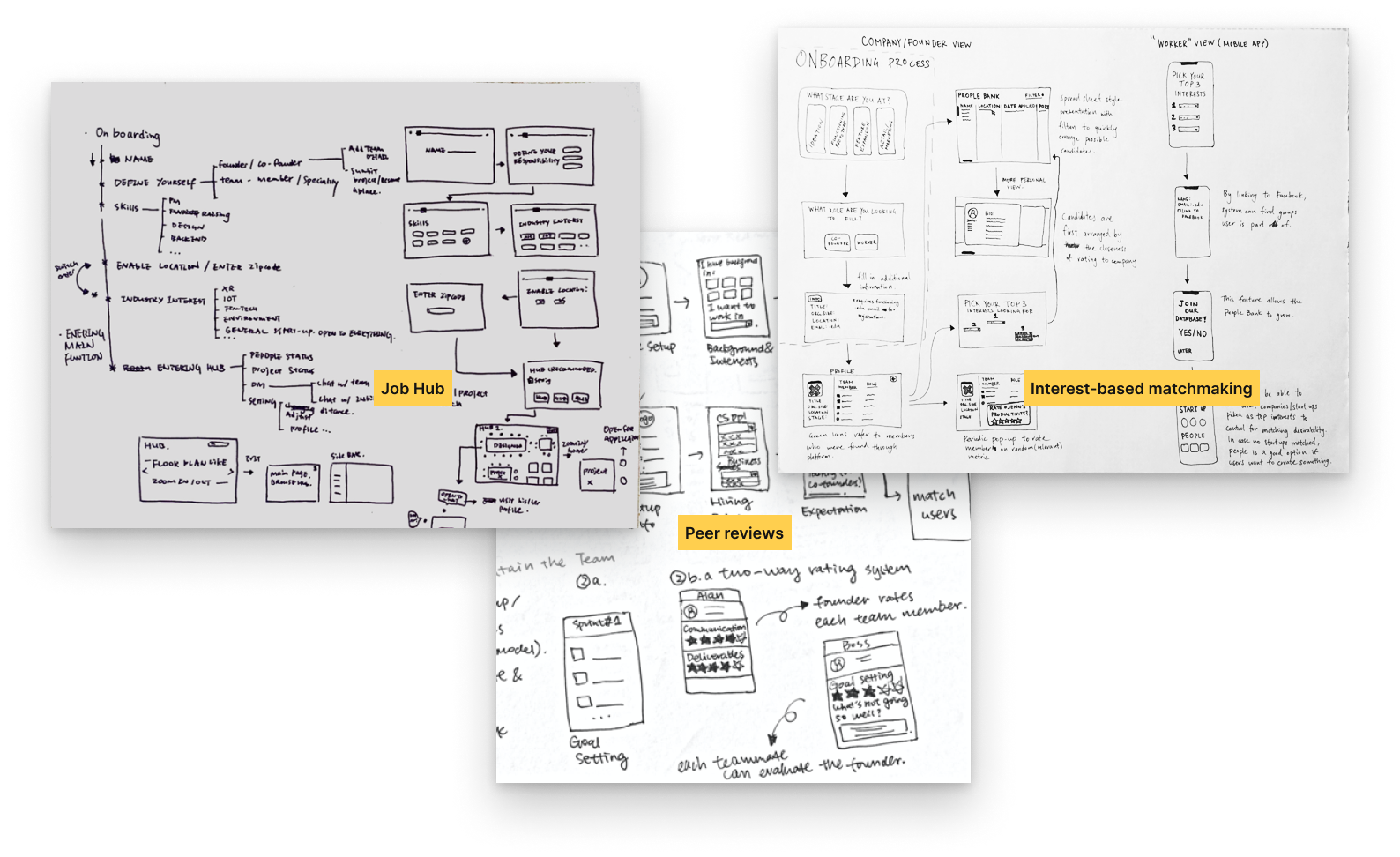 What I would have done differently here is to have gone through some ideation activities as a team. I am sure we could have pushed the boundaries and aligned the design even more if we had set aside some time to ideate and bounce ideas off each other.

From our usability tests, we noted that calling peer reviews evaluations carried a negative tone. Evaluation was renamed as feedback to reframe the process in a more positive light. I was tasked with working on the feedback feature and building out other accompanying features like the menu, application manager and chat. Following iterations, a second round of usability testing was done with our medium-fidelity prototypes. 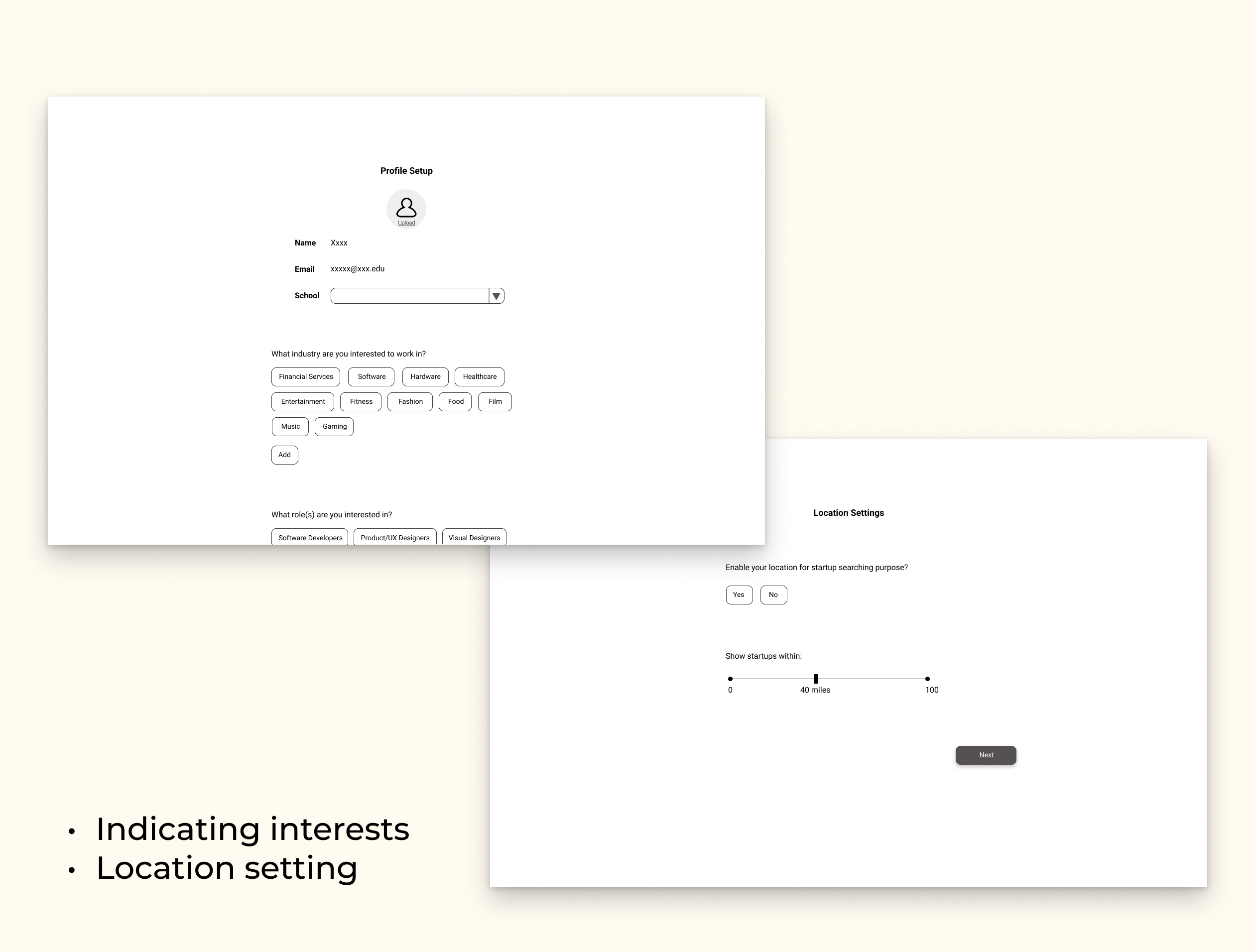 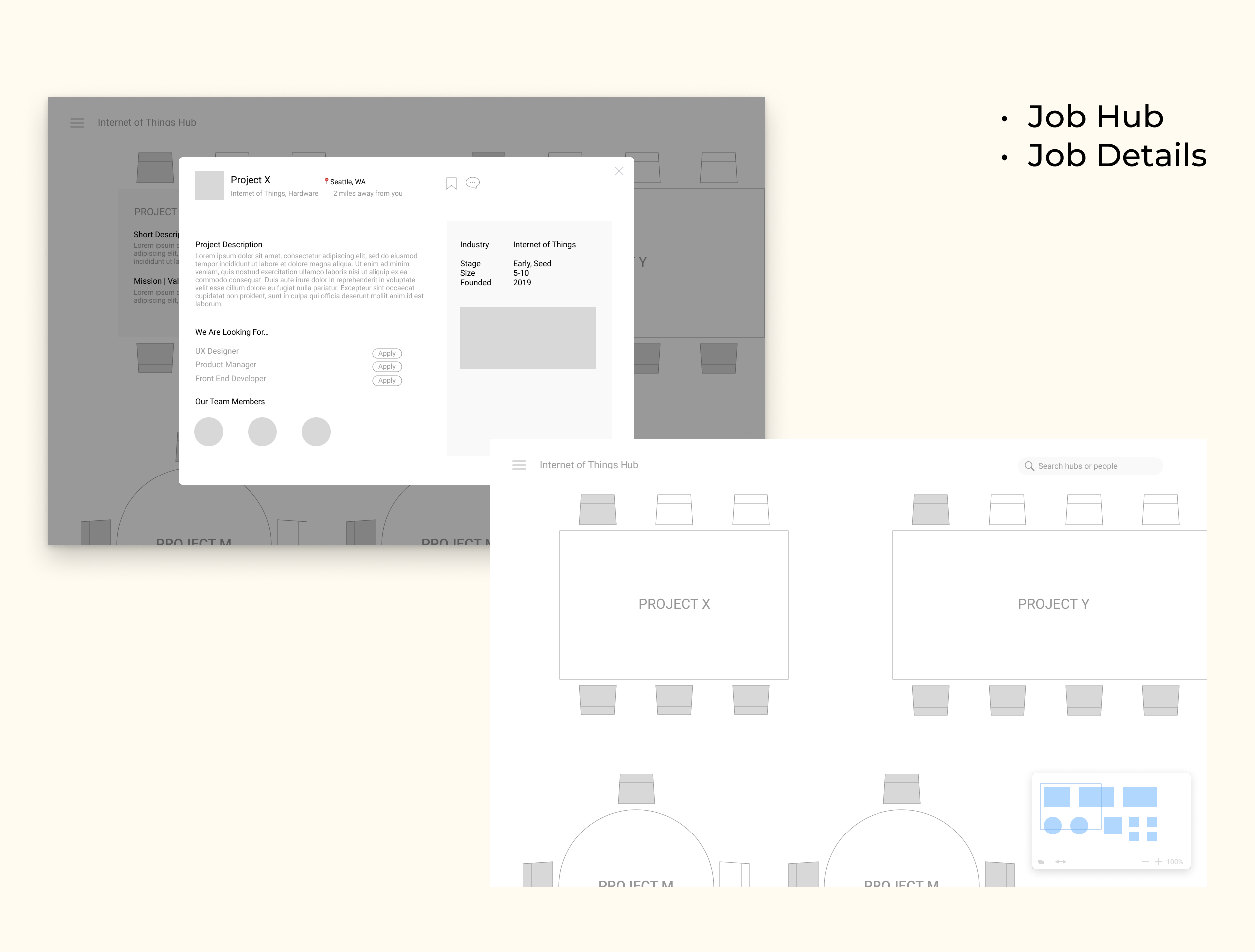 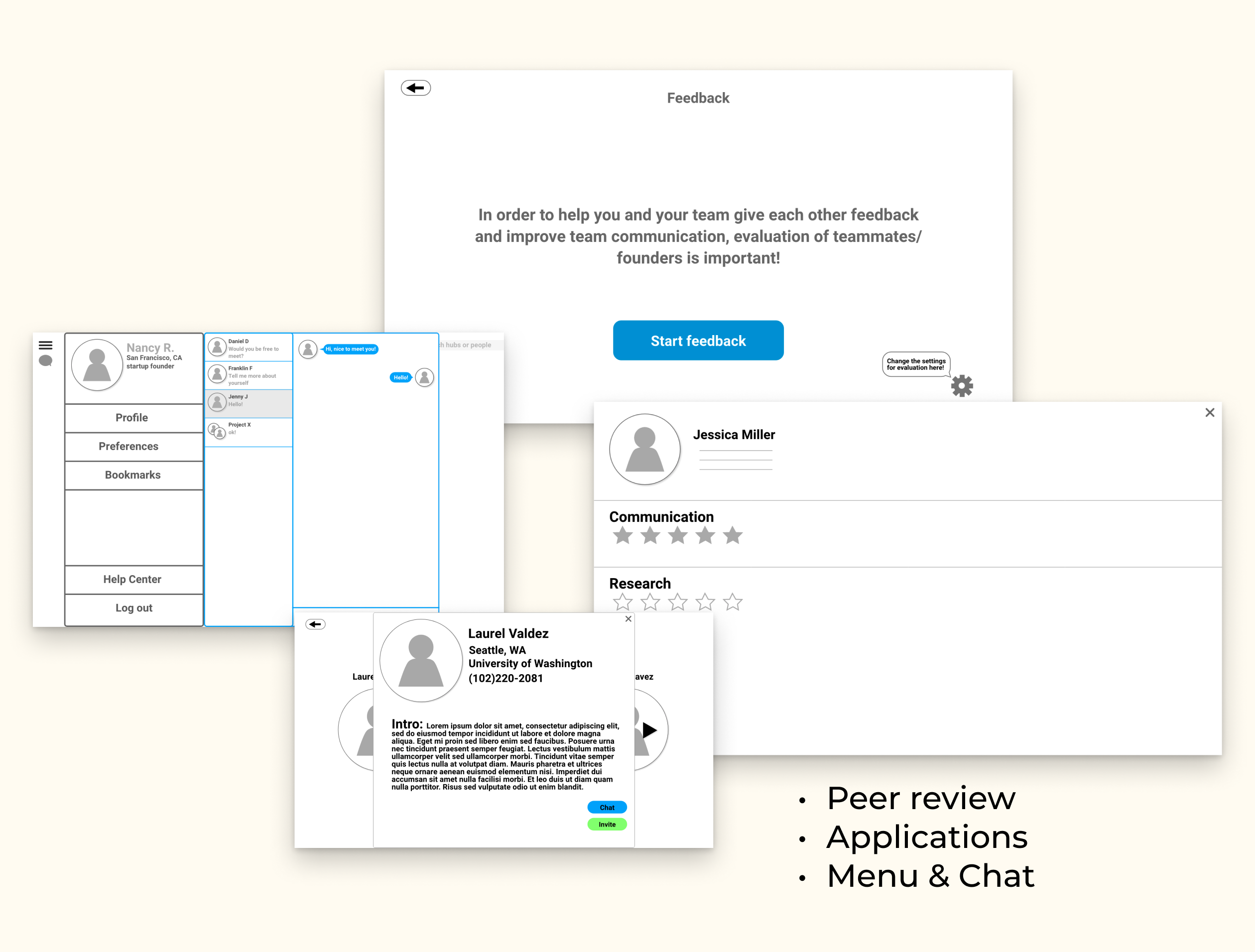 1. The purpose for a chat feature was unclear.
2. Accessing settings on feedback page was confusing.
3. Dropdown lists are preferred for selecting interests.
4. Uncertainty around the impact of ratings.

1. Design efforts were focused away from chat feature.
2. Settings option was removed from feedback.
3. Interests selection switched from pill to dropdown list.
4. More information on feedback made accessible. 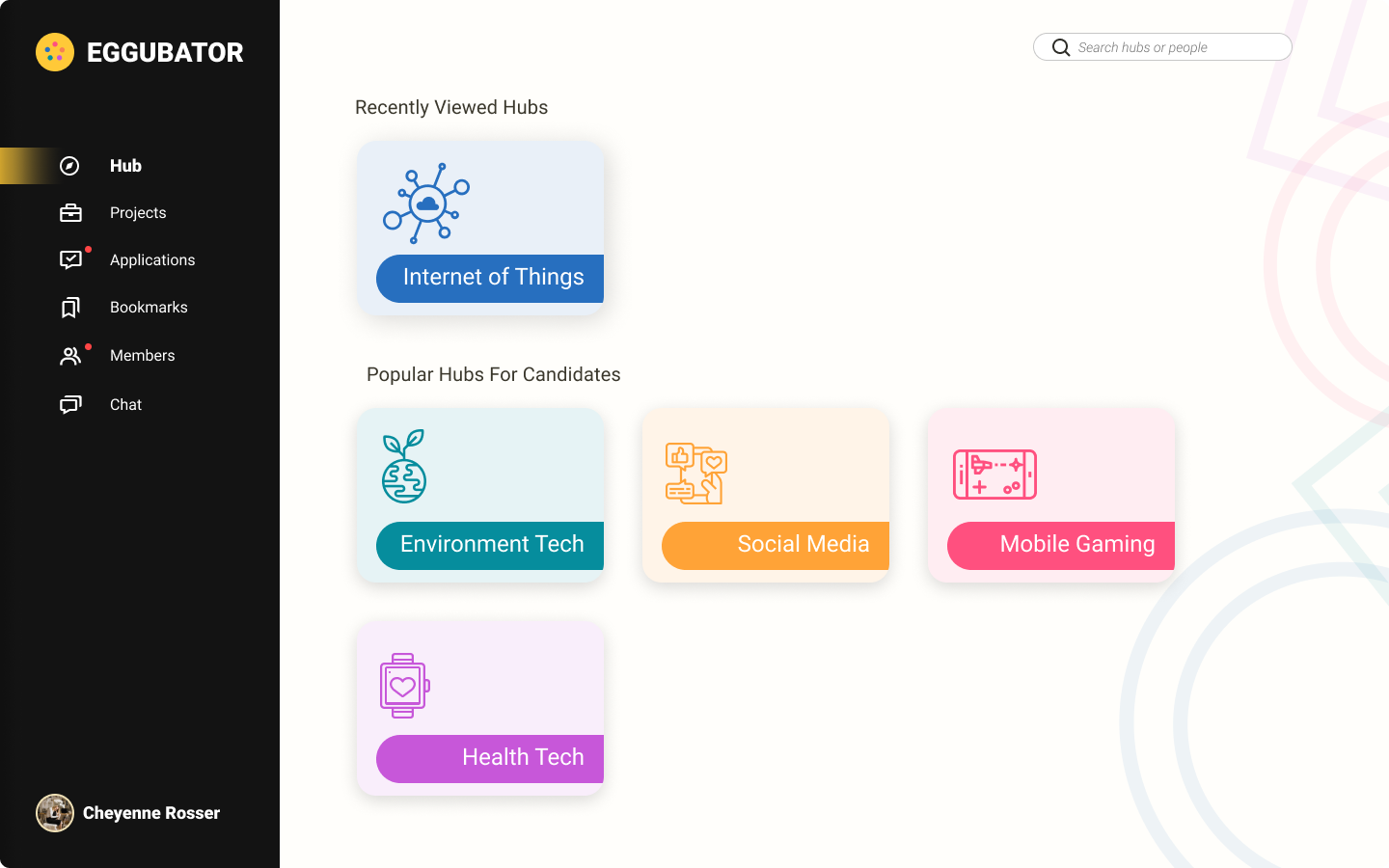 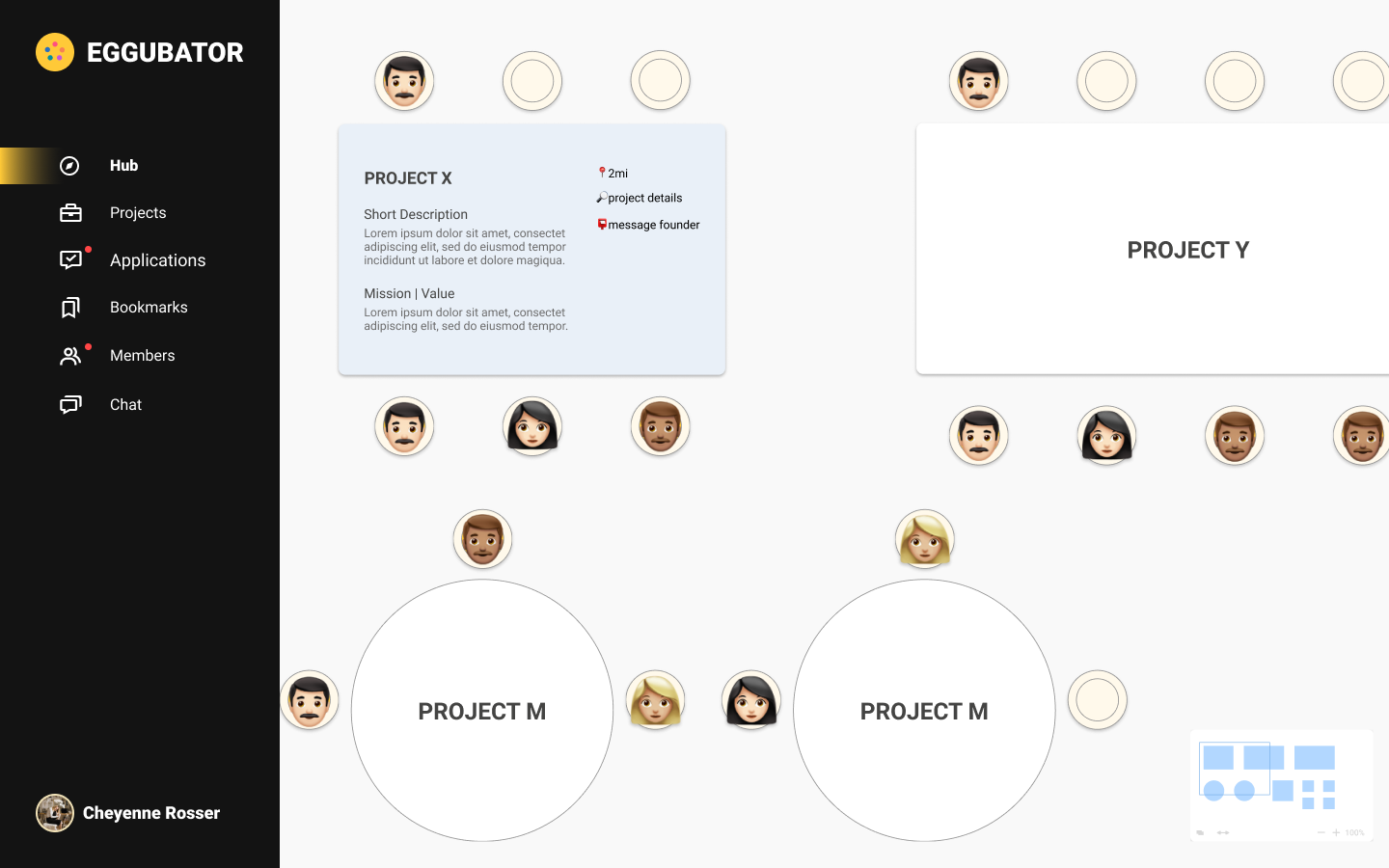 Opportunities are organized into Job Hubs. Within these hubs openings are displayed as seats at a table, introducing game-like elements into the process to encourage exploration of different industries and opportunities. 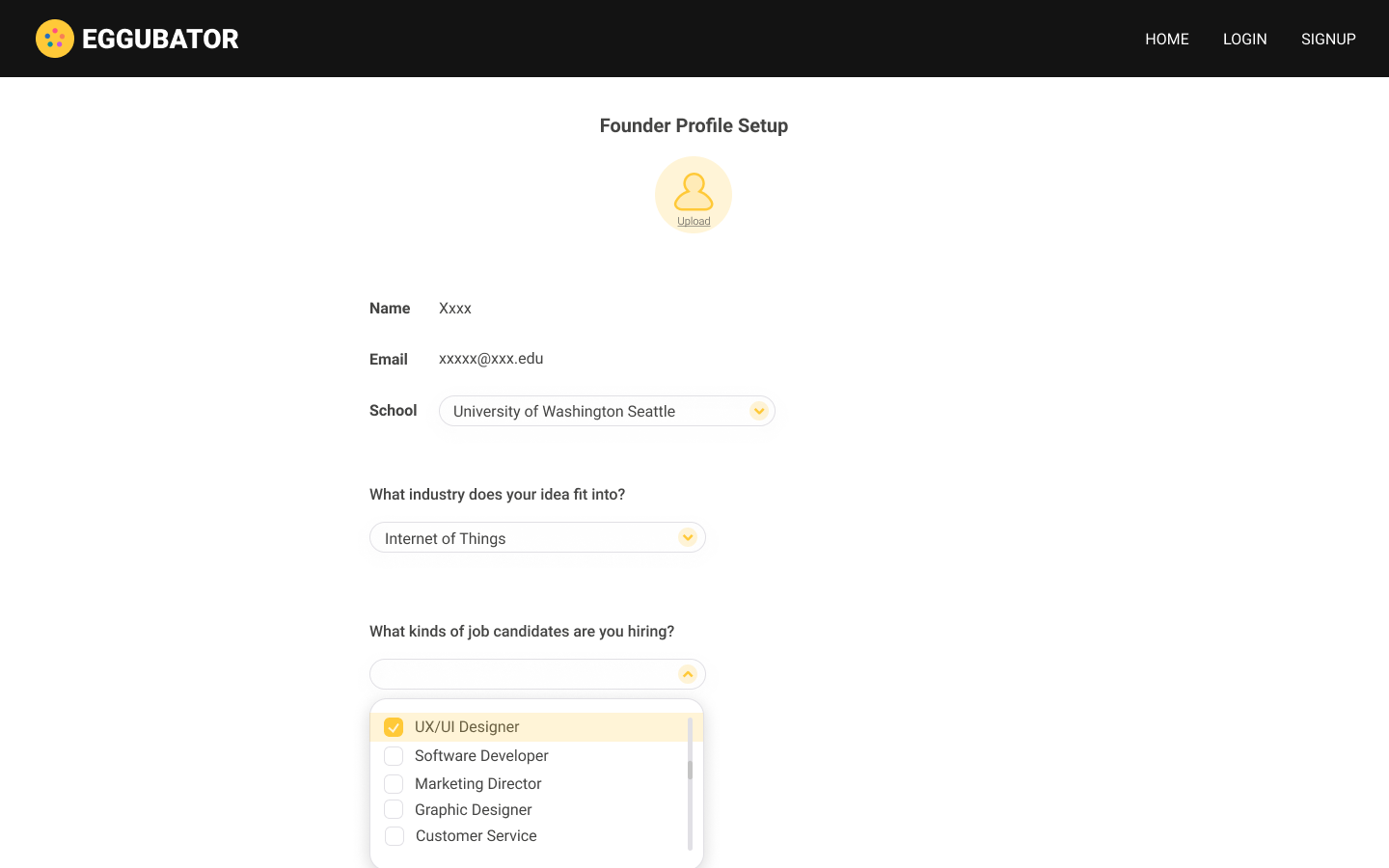 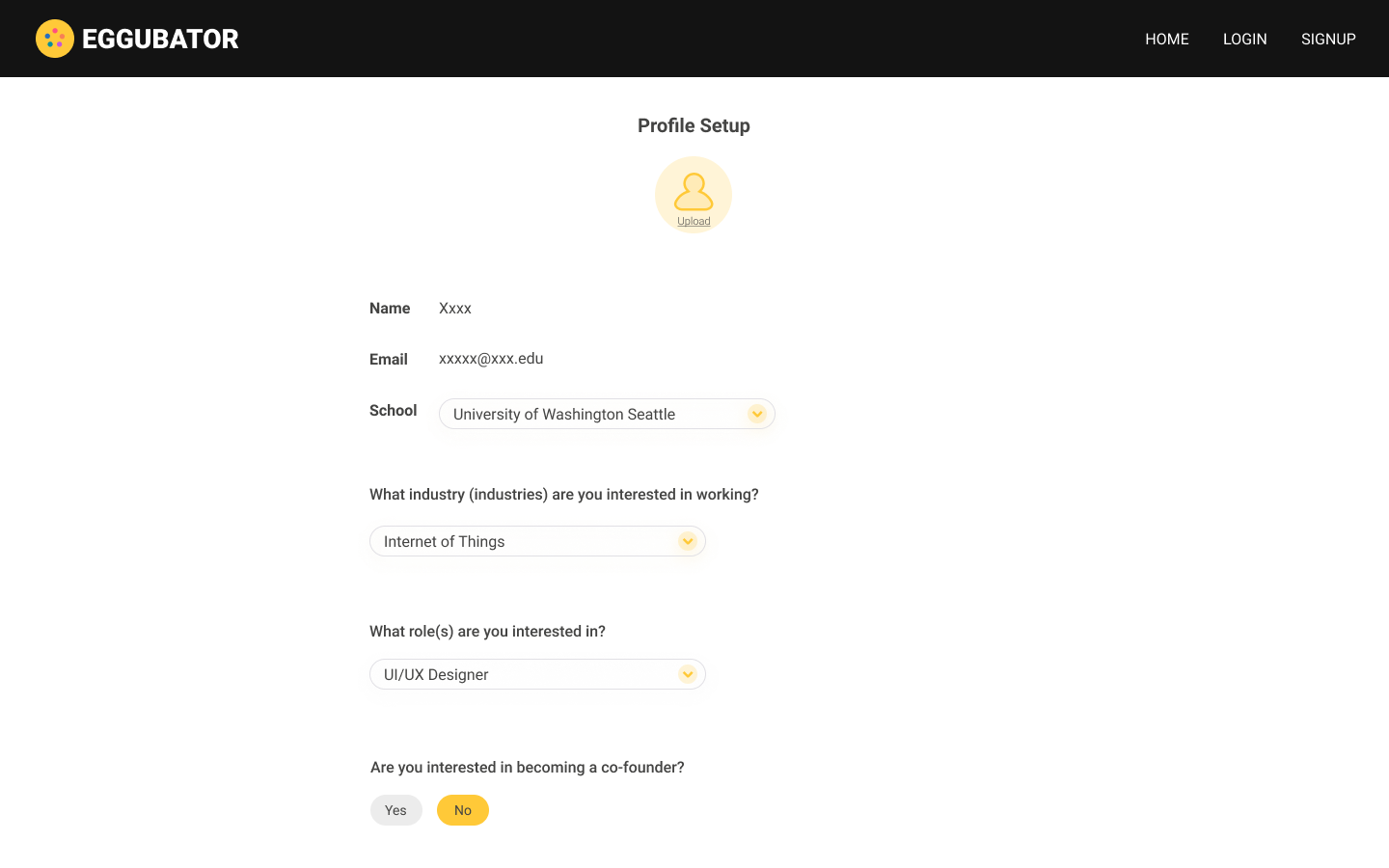 Start-up and candidate interests are indicated during onboarding. This places start-ups in their respective hubs and facilitates more relevant matching. 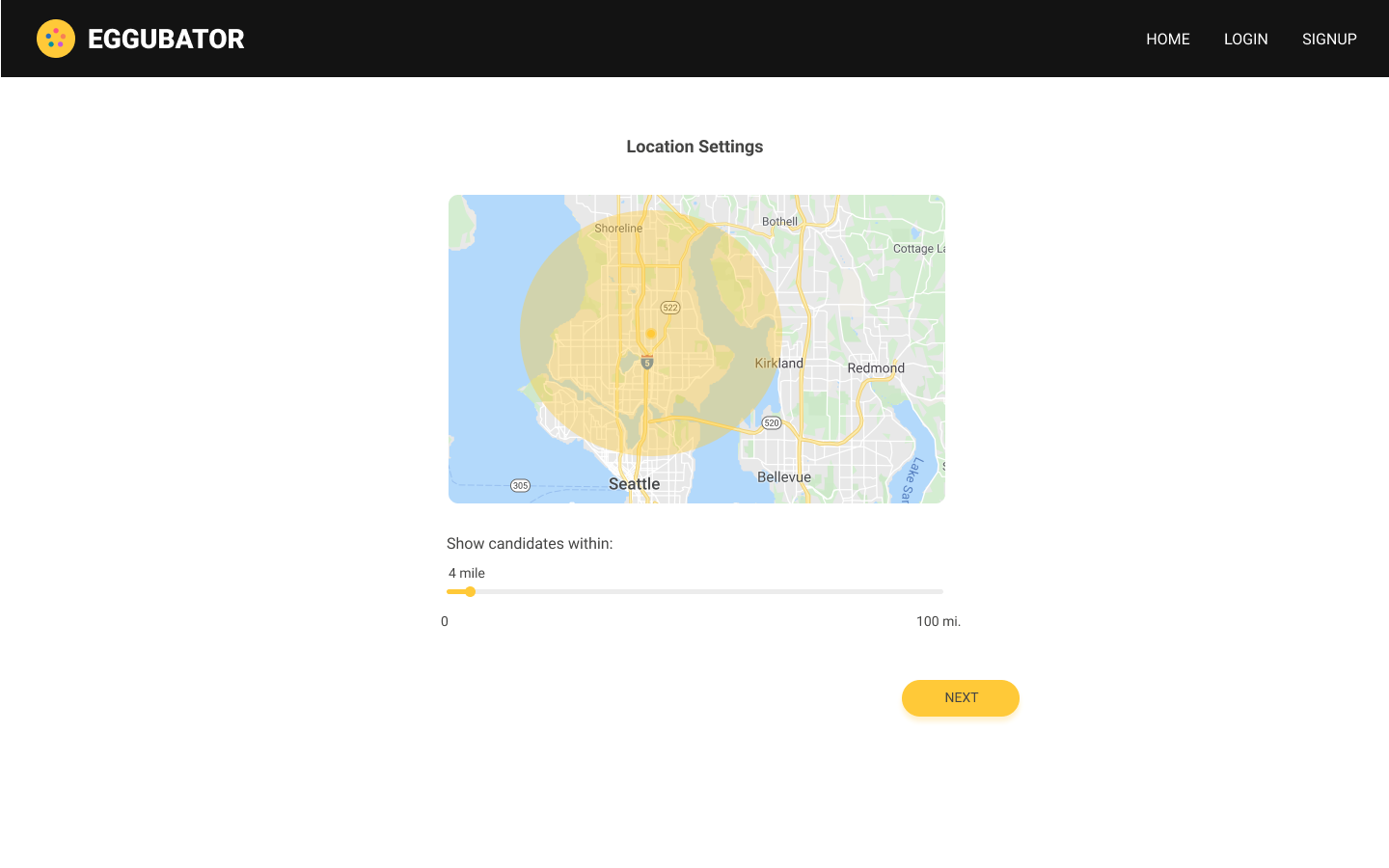 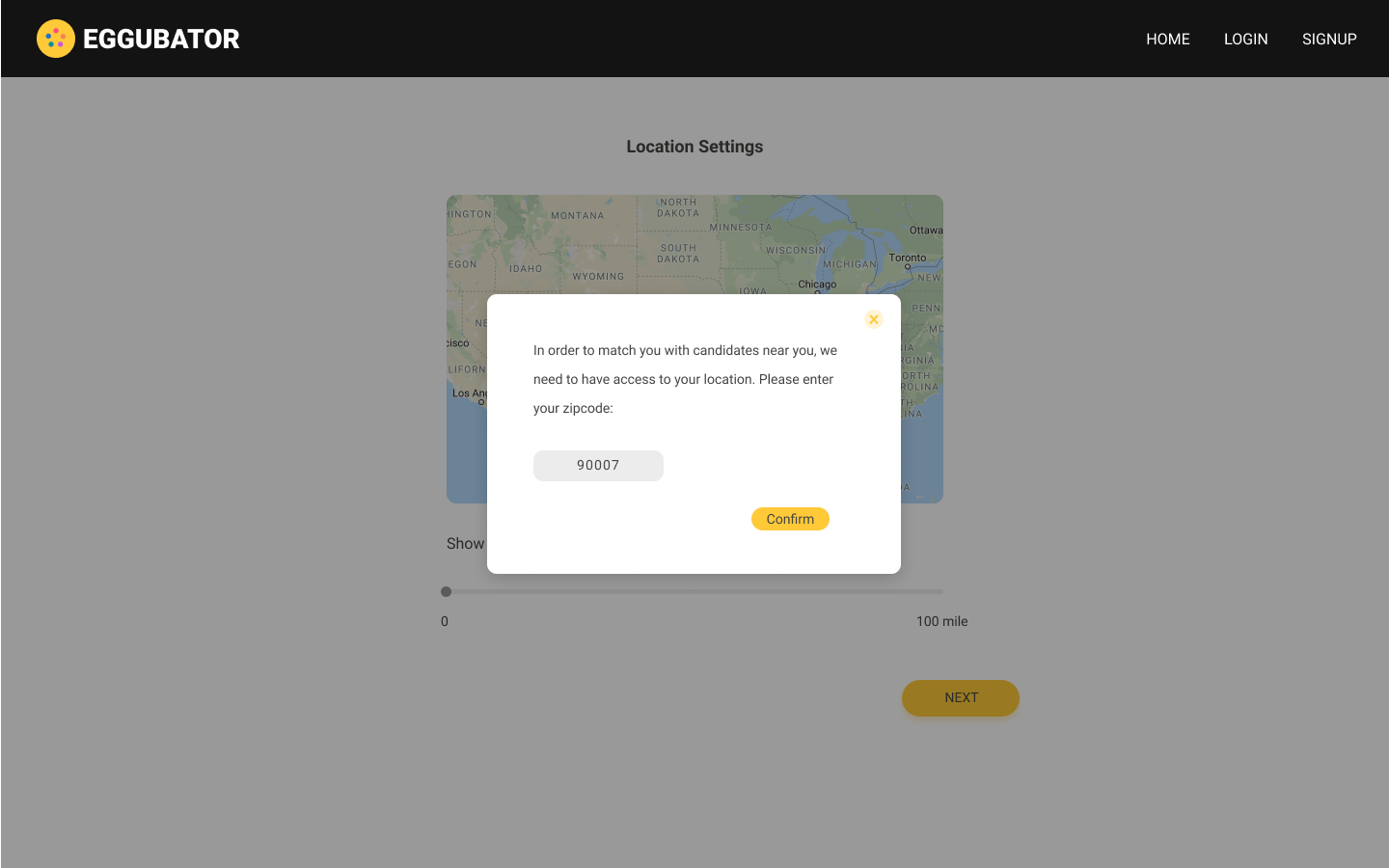 Founders can set their location preferences based on a radius or through their zip code. This limits the candidates to only those within their preferred locations. 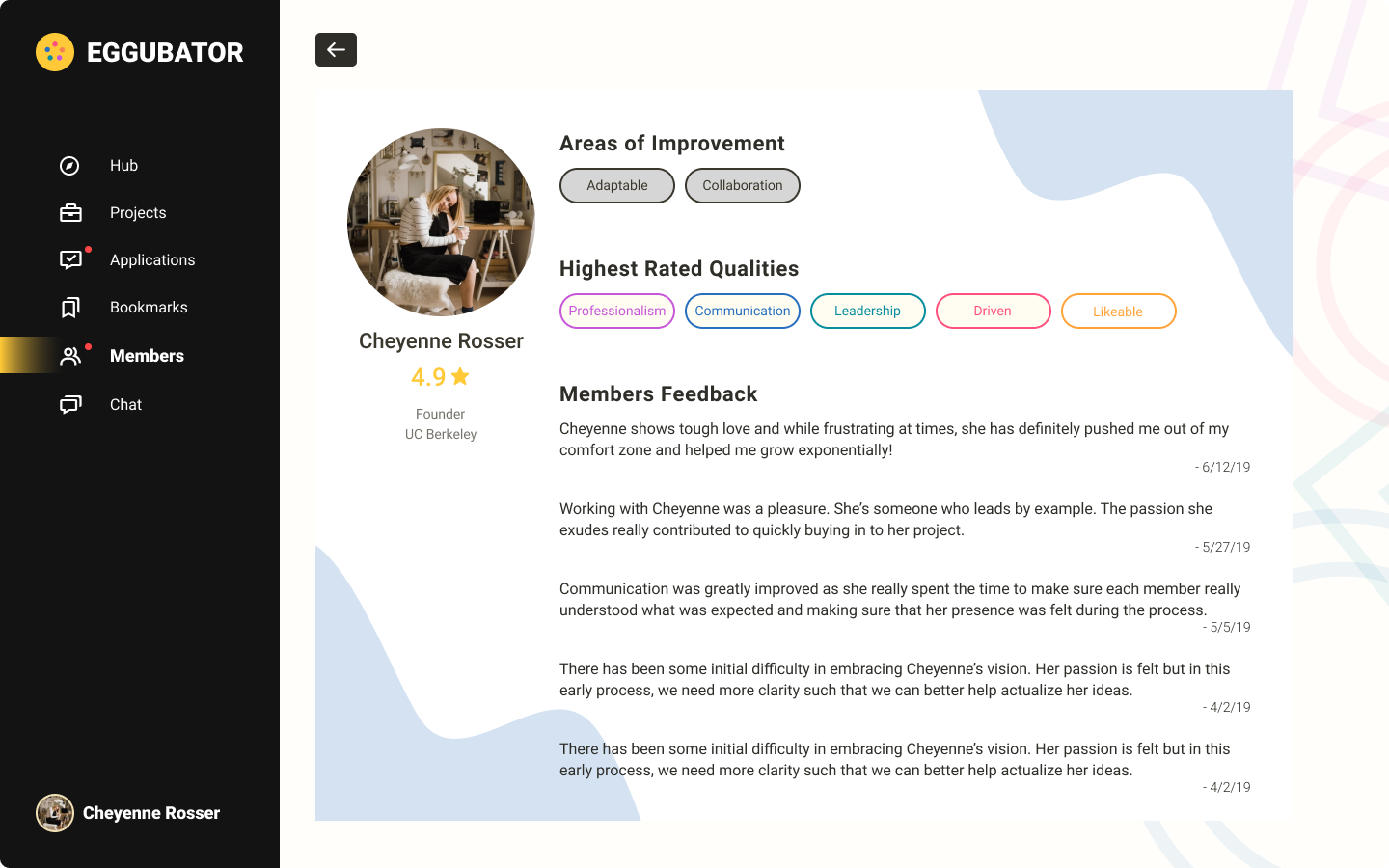 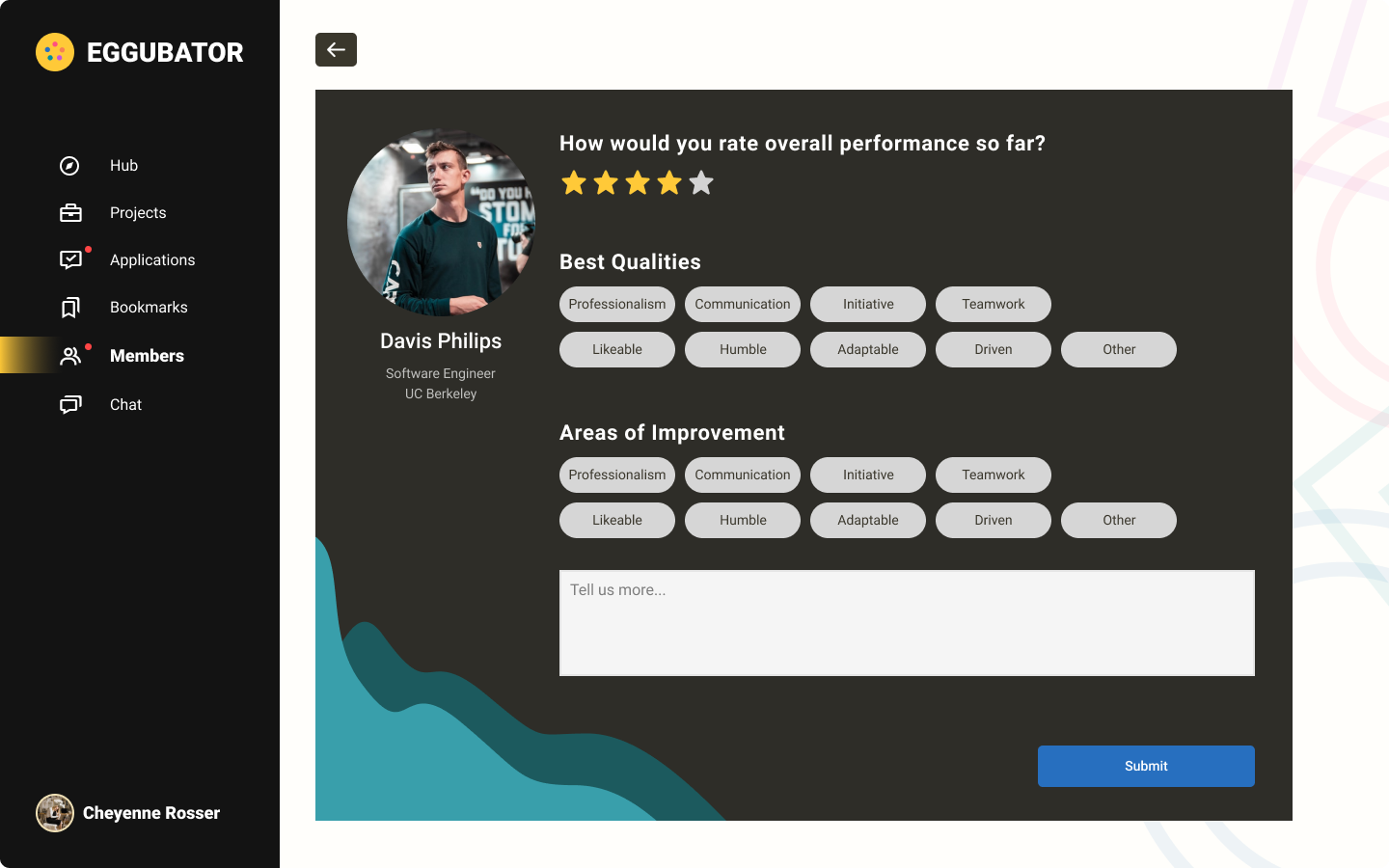 Two-way feedback is periodically given to encourage accountability to a project. A star-rating system similar to those on ride-sharing platforms is used where ratings may impact application success at a later date.

A vibrant color palette was chosen to further evoke an inviting atmosphere and to encourage exploration.

What I would change at this stage is to usability test with the start-up founders we interviewed. Strapped for time, we guerrilla tested with people around us rather than the target users. This meant that we were not able to assess the impact of our solution. Also, we could have done a better job collaborating with each other. There were still moments of misalignment which could have been avoided by working more as a team.

Reflecting on my experience

As my first end-to-end project, this was a huge learning experience. One of the mistakes I made was designing my medium-fidelity prototype in Adobe XD which isn't collaboration-friendly. While I did make the switch to Figma for the final design, this caused some unnecessary clashes and delays.

My biggest takeaway from this experience, though, was learning to not get attached to my design. I had to pivot quickly after ideation when I was tasked with designing the feedback feature. This was unpleasant in the moment but I learned to put the solution first and trust in my team.